What Does AFAICT Mean?

AFAICT means "As Far As I Can Tell." AFAICT is typically used to indicate that a statement you have made is based on your personal understanding of a situation. The abbreviation is a caveat meaning "I am not completely certain, but I think"

Of note, AFAICT has the same meaning as AFAICS (As Far As I Can See).

When I write AFAICT, I mean this: 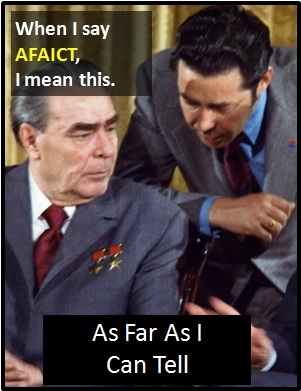 AFAICT means "IÇm not putting my ass on the line, Comrade President."

Examples of AFAICT in Sentences

Here are examples of AFAICT being used in conversations:

An Academic Look at AFAICT

AFAICT is an initialism abbreviation. Technically, this means it is pronounced using its individual letters (i.e., Aay Eff Aay Eye Cee Tee), but as this is harder to say than "As far as I can tell," it is not often uttered using its letters. In other words, the abbreviation AFAICT is for efficiency in writing and not efficiency in speech.

Before the digital era, we would have just written "As Far As I Can Tell" instead of using the abbreviation AFAICT.

Example of AFAICT Used in a Text

AFAIK (as far as I know) AIKRN (all I know right now) DKY (don't know yet) FAIK (for all I know) FMTKFYTFO (for me to know, for you to find out) GOK (God only knows) AIUI (as I understand it) IIUC (if I understand correctly)