What Does GOK Mean?

GOK means "God Only Knows." The phrase "God Only Knows" is a way of saying it's impossible to predict what will happen or to give an accurate answer to a question.

Other abbreviations with similar meanings to GOK include: Of note, "God Only Knows" is a song written in May 1966, by Brian Wilson and Tony Asher, for the legendary American band The Beach Boys. It is widely considered to be the band's best ever song.

When I write GOK, I mean this: 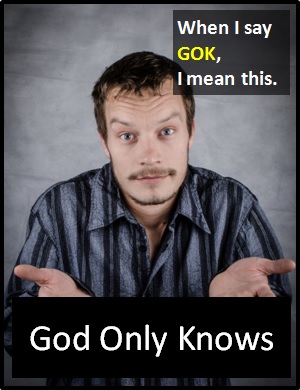 Examples of GOK in Sentences

Here are examples of GOK being used in conversations:

An Academic Look at GOK

GOK is an interjection. An interjection is not grammatically related to any other part of the sentence. It is included in a sentence (usually at the start) to express a sentiment such as surprise, disgust, joy, excitement, or enthusiasm. In formal writing, interjections are usually offset from the surrounding words with commas.

Before the digital era, we might have said something like "Goodness Knows" or even just "God Only Knows" instead of using GOK.

Example of GOK Used in a Text