What Does BHL8 Mean?

BHL8 means 'Be Home Late'. In full, it means "I will be home late" (i.e., it is not an instruction telling someone to be home late).

As well as abbreviating "Be Home" to BH, BHL8 uses the number 8 to replace the letters "ate." Here are some other terms that make use of this technique: Of interest, there abbreviation BHL is not used for "Be Home Late." This is probably because L8 (Late) is so well established, and the L8 part is required to ensure the term is understood or can be guessed.

When I write BHL8, I mean this: 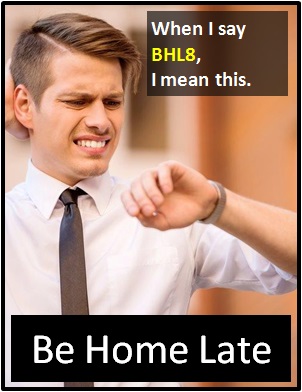 Examples of BHL8 in Sentences

Here are examples of BHL8 being used in conversations:

An Academic Look at BHL8

BHL8 is typically used as a standalone declarative sentence with the meaning "I will be home late."

Of note, BHL8 is not an acronym or an abbreviation. It is classified as a cyber term because it employs both letters and numbers. Cyber term terms were originally introduced for brevity, but nowadays they are mostly used for fun.

Before the digital era, we would have just said "I'll Be Home Late" instead of BHL8.

Example of BHL8 Used in a Text