What Does BNO Mean?

In general chat online and in text messaging, the abbreviation BNO is widely used with the meanings "Big Night Out" or "Boys Night Out."

BNO is also used with the meaning "British National (Overseas)" to refer to a person who was a "British Overseas Territories Citizen" (BOTC) by connection with Hong Kong when the British colony was handed over to China in 1987.

Up until 1 July 1997, eligible applicants could obtain a special BNO passport, which allowed them to visit the UK visa-free for six months. After that date, subject to certain conditions, anyone who had not applied for BNO status, became a "British Overseas Citizen" (BOC), a category which proffers less privileges than BNO.

In 2020, the Chinese central government imposed on Hong Kong a controversial national security law, which the UK considered a violation of the principle of "One country, two systems" as set out by the Sino-British Joint Declaration of 1984 (an internationally binding treaty). In response to China's actions, the UK government announced that BNO passport holders could apply for limited leave to remain in the UK, allowing them to work or study in the country for 5 years. They could then apply for settled status and, after a further 12 months, for citizenship.

According to the British Consulate General in Hong Kong, as at January 2021, approximately 300,000 people held a BNO passport. However, an estimated 2.9 million people could be eligible for BNO status.

Further details can be found on the GOV.UK website.

When I write BNO, I mean this: 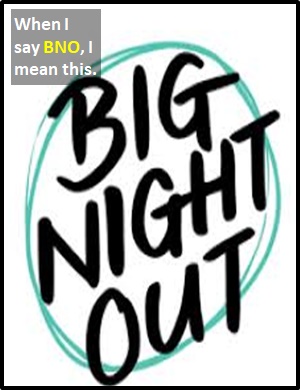 "British National (Overseas)" is another common definition for BNO.

Examples of BNO in Sentences

Here are examples of BNO being used in conversations:

(Here, BNO means both "Big Night Out and "Boys Night Out.")

An Academic Look at BNO

Whether used with the meaning "Big / Boys Night Out" or "British National (Overseas)," BNO is classified as an initialism abbreviation because it is pronounced using its individual letters (i.e., "Bee Enn Oh"). Initialisms are different to acronyms, which are spoken like words.

Example of BNO Used in a Text