What Does BYKI Mean?

BYKI means "Before You Know It." The abbreviation BYKI means something will happen sooner than you might expect, or almost immediately.

Of note, "Before You Know It" is the title of a 2013 documentary looking at the lives and challenges of three gay senior citizens.

The phrase "Before you can say Jack Robinson" (which means the same as BYKI) originated in the 1700s. Not much is known of Jack Robinson, although it is believed he was someone whose visits were so short, he barely had time to be announced before he'd left again.

When I write BYKI, I mean this: 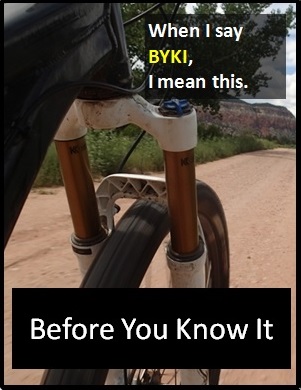 BYKI means something will happen faster than you think.

Examples of BYKI in Sentences

Here are examples of BYKI being used in conversations:

An Academic Look at BYKI

BYKI is an idiom, a phrase or saying that is not taken literally, but often uses colourful or imaginative language to describe something or someone.

Before the digital era, we might have said something like "quicker than you think" instead of BYKI.

Example of BYKI Used in a Text