CUOL means "See You on Line."

When I write CUOL, I mean this: 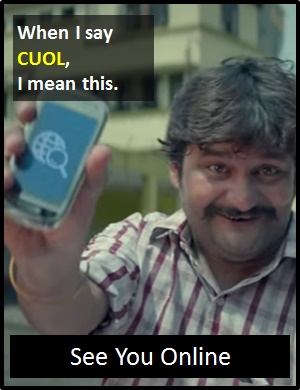 CUOL means "See You Online." The abbreviation CUOL is a way of saying goodbye when the intention is to meet up again in an online environment, such as in an online game or a chat room. The abbreviation CUOL makes it clear that you will next be talking to the message recipient online, rather than in person or on the telephone. No timescale is stated or implied; the online meeting may be soon or at any other time in the future.

Of note, CUOL can also be written as “CYO” "SUOL” or “SYO". However, "CUOL" is the more common abbreviation.

Examples of CUOL in Sentences

Here are examples of CUOL being used in conversations:

An Academic Look at CUOL

CUOL is an initialism abbreviation. Technically, this means it is pronounced using its individual letters (i.e., See Yoo Oh Ell), but as this is harder to say than "See You Online" it is not often uttered using its letters. In other words, the abbreviation CUOL is for efficiency in writing and not efficiency in speech.

The abbreviation CUOL is normally used as a standalone declarative sentence (i.e., a statement) with the meaning "See You Online”. CUOL is not often used as another part of speech within a wider sentence.

Example of CUOL Used in a Text