CUWYL means "Catch Up With You Later."

When I write CUWYL, I mean this: 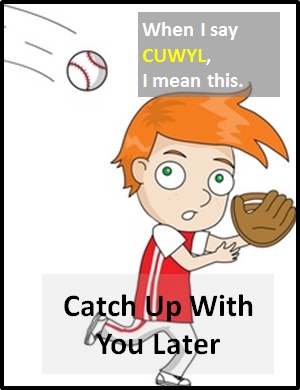 "Catch Up With You Later"

Examples of CUWYL in Sentences

Here are examples of CUWYL being used in conversations:

An Academic Look at CUWYL

CUWYL is an acronym (i.e., an abbreviation spoken like a word). Acronyms differ from initialism abbreviations, which are pronounced using their individual letters. The acronym, CUWYL is pronounced in the same way as the adjective “cool”. However, it is not normally used in direct, face-to-face conversation. Therefore, the acronym CUWYL is for efficiency in writing and not efficiency in speech.

The acronym CUWYL is normally used as a standalone declarative sentence (i.e., a statement) with the meaning "Catch Up With You Later”. CUWYL is not often used as another part of speech within a wider sentence.

Example of CUWYL Used in a Text