What Does DND Mean?

The abbreviation DND has a number of popular meanings, including "Do Not Disturb," "Do Not Delete," "Drunk and Disorderly," and "Dungeons and Dragons." Here is more information about each of these definitions of DND.

The abbreviation DND is widely used with the meaning "Do Not Disturb" to indicate that someone doesn’t want to be troubled or interrupted.

DND is also used with the meaning "Do Not Delete." In this context, DND is used to label posts on social media or files that should not be erased.

DND can also stand for "Drunk and Disorderly." This is an official police term now used widely to refer to a person who is intoxicated and behaving badly.

The phrase "Drunk and Disorderly" is also abbreviated as D&D

In gaming circles, DND is widely used to refer to the popular role-playing game "Dungeons and Dragons."

When I write DND, I mean this: 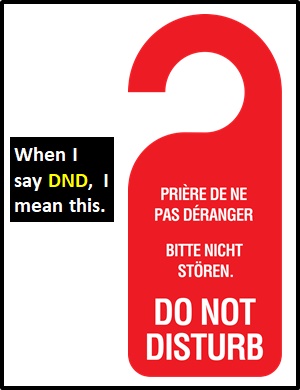 DND also means "Do Not Delete," "Drunk and Disorderly," and "Dungeons and Dragons."

"Do Not Delete" is another common definition for DND.

Examples of DND in Sentences

Here are examples of DND being used in conversations:

An Academic Look at DND

As it is pronounced using its individual letters (i.e., "Dee Enn Dee"), DND is classified as an initialism abbreviation. Initialisms are different to acronyms, which are spoken like words.

Example of DND Used in a Text