What Does DTM Mean?

DTM usually means "Dead To Me." It can also mean "Doing Too Much" and "Don't Touch Me."

The abbreviation DTM is mainly used with the meaning "Dead To Me," as a very strong statement that the sender is not interested in another person. DTM is intended to indicate that the sender is not interested in the person to whom they are referring, but is just as likely to indicate that they are angry with that person and that they very much exist for them on an emotional level.

In 2014, Melanie Martinez released A song called "Dead to Me," which details her attempts to get over being dumped by a boyfriend by making him not exist in her mind.

Doing Too Much" and "Don't Touch Me

Much less commonly, DTM is also used with the meanings "Doing Too Much" or "Don't Touch Me."

When I write DTM, I mean this: 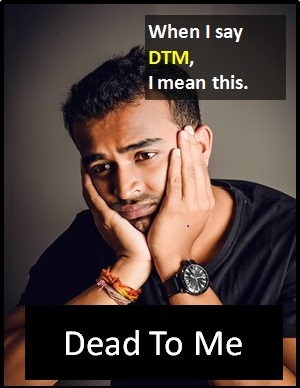 DTM also means "Doing Too Much" and "Don't Touch Me."

"Doing Too Much" is another definition for DTM.

DTM is also used with the meaning "Don't Touch Me."

Examples of DTM in Sentences

Here are examples of DTM being used in conversations with the meaning "Dead To Me":

An Academic Look at DTM

As it is pronounced using its individual letters (i.e., "Dee Tee Em"), DTM is classified as an initialism abbreviation. Initialisms are different to acronyms, which are spoken like words.

Before the digital era, we might have just said something like "Dead To Me," instead of using the abbreviation DTM.

Example of DTM Used in a Text