IHYSM means "I Hate You So Much."

The abbreviation IHYSM is an emphatic expression of dislike that leaves no room for doubt of the sender's true feelings. Unlike other expressions of hatred, such as IHU and IHY, which simply mean "I Hate You," IHYSM is not used ironically, to express jealousy or envy of another's good fortune. The inclusion of the adverbial phrase "So Much" makes it clear that hatred is the genuine emotion being expressed.

When I write IHYSM, I mean this: 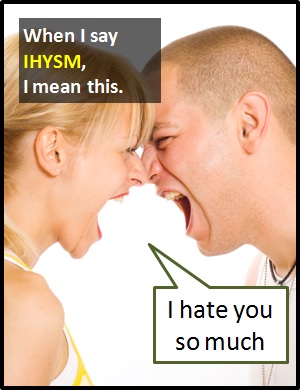 This couple really do hate each other. (At least, for the moment.)

Examples of IHYSM in Sentences

Here are examples of IHYSM being used in conversations:

An Academic Look at IHYSM

IHYSM is an initialism abbreviation. Technically, this means it is pronounced using its individual letters (i.e., Eye Aitch Why Ess Em), but as this is harder to say than "I hate you so much," it is not often uttered using its letters. In other words, the abbreviation IHYSM is for efficiency in writing and not efficiency in speech.

Before the digital era, we might have said something like "I Really Hate You" or "You Are Loathsome" instead of using IHYSM.

Example of IHYSM Used in a Text