What Does EPIC FAIL Mean?

EPIC FAIL means "Embarassing or Humorous Mistake." The term is typically used when a person fails at a task which should have been relatively easy. An activity may be described as an EPIC FAIL if it didn't go very well. It also denotes an embarrassing (yet hilarious) mistake.

On YouTube, the phrase EPIC FAIL often features in the comments of viral videos. Many people search EPIC FAIL on YouTube as it is a good way to find popular "FAIL" videos.

When I write EPIC FAIL, I mean this: 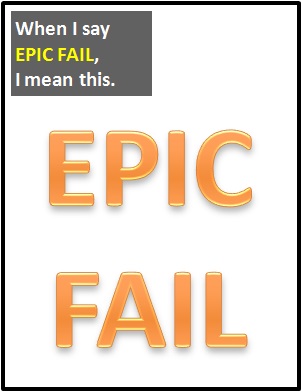 EPIC FAIL means "Total Failure (from the popular Epic Fail website)". This is the most common meaning for EPIC FAIL on social-media platforms such as Twitter, Facebook, and Snapchat.

Examples of EPIC FAIL in Sentences

Here are examples of EPIC FAIL being used in conversations:

An Academic Look at EPIC FAIL

EPIC FAIL is typically used as a noun (i.e., a naming word). For example:

(Here, EPIC FAIL is being used as a noun.)

Before the digital era, we would have just laughed or said "that's unfortunate" or "oh dear" instead of EPIC FAIL.

Example of EPIC FAIL Used in a Text