What Does FGS Mean?

FGS means "For God's Sake." The use of the abbreviation FGS is a way of expressing surprise, dismay, or disappointment. It usually indicates irritation or anger on the part of the writer.

Of Note: The abbreviation FGS can also be used to mean "First Girlfriend Syndrome."

When I write FGS, I mean this: 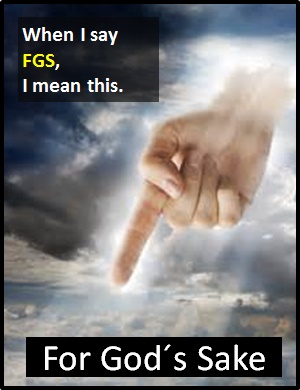 Examples of FGS in Sentences

Here are examples of FGS being used in conversations:

An Academic Look at FGS

FGS is an initialism abbreviation. Technically, this means it is pronounced using its individual letters (i.e., Eff Gee Ess), but as this is harder to say than "For God's Sake" it is not often uttered using its letters. In other words, the abbreviation FGS is for efficiency in writing and not efficiency in speech.

The abbreviation FGS is an interjection. An interjection is not grammatically related to any other part of the sentence. It is included in a sentence (usually at the start) to express a sentiment such as surprise, disgust, joy, excitement, or enthusiasm.

Example of FGS Used in a Text