OFGS means "Oh, For God's Sake!". The abbreviation OFGS is used to express surprise, irritation or frustration. It is often used to add emphasis to a request or question.

OFGS is very similar in meaning to the abbreviations FGS (For God's Sake), FCS (For Christ's Sake) and FHS (For Heaven's Sake). Care should be taken when using any of these abbreviations, as some Christians will find the use of religious terms in this context offensive.

When I write OFGS, I mean this: 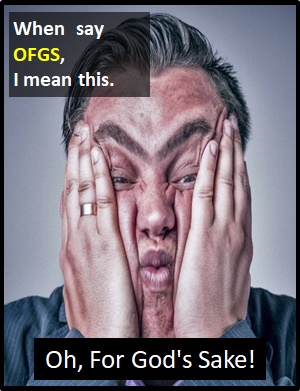 Examples of OFGS in Sentences

Here are examples of OFGS being used in conversations:

An Academic Look at OFGS

As it is pronounced using its individual letters (i.e., "Oh Eff Gee Ess"), OFGS is classified as an initialism abbreviation. Initialisms are different to acronyms, which are spoken like words.

Before the digital era, we might have just said "Oh, For God's Sake" instead of using the abbreviation OFGS.

Example of OFGS Used in a Text