What Does FUBAR Mean?

FUBAR means "F*cked Up Beyond All Recognition." Here is more information about the definition of FUBAR, with examples of use.

FUBAR has been used in use as an informal military abbreviation since at least World War II. Effectively, it means that something is irreparably broken.

FUBAR is applied not just to physical items, but also to situations. For example: There are a number of slight variations on the definition of FUBAR, but all have the same basic meaning. These include: FUBAR first came to prominence in the 1986 movie "Platoon." It has also featured in the movies "Full Metal Jacket," "Saving Private Ryan," "Hamburger Hill," and "Predator."

When I write FUBAR, I mean this: 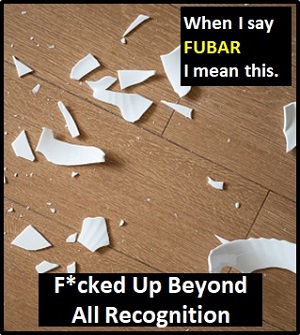 An Academic Look at FUBAR

FUBAR is an acronym (i.e., an abbreviation spoken like a word). Acronyms differ from initialism abbreviations, which are pronounced using their individual letters.

FUBAR is not a modern cyber term. Even though its popularity grew markedly in the early 90s, FUBAR has been in common use since at least 1940, and may even have been noted as early as AD 1803. [click here for evidence]

Example of FUBAR Used in a Text