The abbreviation IJDK is used to indicate a lack of knowledge or an inability to answer a question. The inclusion of the word "just" adds emphasis and may indicate that the lack of knowledge is despite the best efforts of the sender. However, it may also indicate a lack of interest in finding an answer or a solution. As such, IJDK often means something like "I Don't Know And I Don't Care."

When I write IJDK, I mean this: 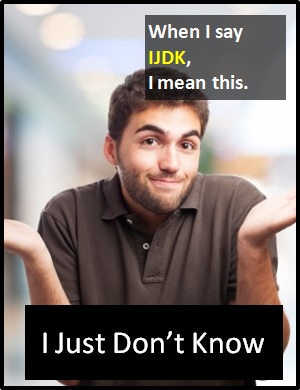 IJDK (and maybe I don't care either).

Examples of IJDK in Sentences

Here are examples of IJDK being used in conversations:

An Academic Look at IJDK

Before the digital era, we might have said something like "I Really Have No Idea" or even "I Just Don't Know" instead of using IJDK.

Example of IJDK Used in a Text