The abbreviation IDWT is used with the meaning "I Don't Want To" to indicate a lack of enthusiasm on the part of the sender to participate in or respond to something. IDWT is also often used with words such as "rude," "direct," or "pushy" to precede an insensitive remark, an unsolicited approach or advice that may not be appreciated. For example: IDWT can also stand for "I Don't Watch Television."

When I write IDWT, I mean this: 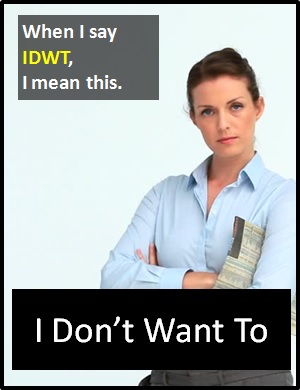 Examples of IDWT in Sentences

Here are examples of IDWT being used in conversations:

An Academic Look at IDWT

IDWT is an initialism abbreviation. Technically, this means it is pronounced using its individual letters (i.e., Eye Dee Dublyoo Tee), but as this is harder to say than "I Don't Want To," it is not often uttered using its letters. In other words, the abbreviation IDWT is for efficiency in writing and not efficiency in speech.

The verb "to want" indicates a desire or need for something or someone, whereas "don't want" expresses the opposite.

Before the digital era, if we didn't want to do something we might have said "I'd Rather Not" or even just "I Don't Want To" instead of using IDWT.

Example of IDWT Used in a Text