The abbreviation IDWK is used with the meaning "I Don't Want To Know" to indicate that the sender does not want to hear something. IDWK is typically used to indicate a lack of desire to hear bad or upsetting news.

In 1977, British-American rock band Fleetwood Mac released a song "I Don't Want To Know," written by their singer Stevie Nicks. The song was featured on the album "Rumours," which sold over 40 million copies worldwide.

When I write IDWTK, I mean this: 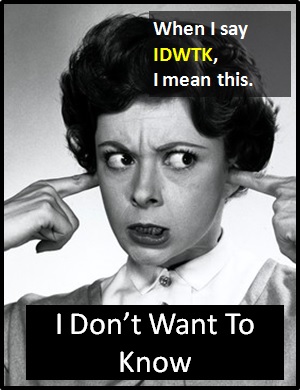 Examples of IDWTK in Sentences

Here are examples of IDWTK being used in conversations:

An Academic Look at IDWTK

IDWTK is an initialism abbreviation. Technically, this means it is pronounced using its individual letters (i.e., Eye Dee Dublyu Tee Kay), but as this is harder to say than "I Don't Want To Know," it is not often uttered using its letters. In other words, the abbreviation IDWTK is for efficiency in writing and not efficiency in speech.

Before the digital era, we might have said something like "I'd Rather Not Know" or even just "I Don't Want To Know," instead of using IDWTK.

Example of IDWTK Used in a Text