What Does IG Mean?

IG usually means "Instagram." However, it also means "Ignore," "Ignorant," "In Game," and "I Guess." Here's more information about each of these definitions of IG.

The abbreviation IG is widely used online and in text messaging to refer to the photo- and video-sharing, social-networking app Instagram.

IG is also used with the meaning "Ignore." In this context, IG is sent as an instruction to disregard a previous message.

When used with the meaning "Ignorant," IG describes a person as discourteous or rude.

Note: When IG means "Ignore" or "Ignorant," it is sometimes written as IGG or IGGY.

IG is used in gaming circles with the meaning "In Game" to refer to things that happen within a game, rather than in real life.

When used to mean "I Guess," IG indicates agreement with something that has just been said. IG usually implies a reluctant agreement, rather then whole-hearted agreement and is often used in place of "no" to avoid offending.

Here's a short video explaining how to use IG:

When I write IG, I mean this: 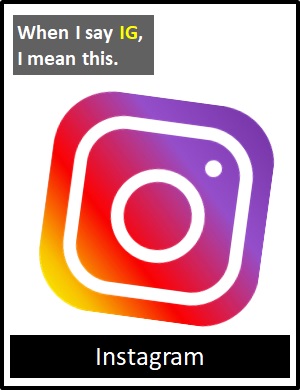 IG is also often used with the meaning "Ignore."

"Ignorant" is another common definition for IG.

"In Game" is a common definition for IG in gaming circles, on apps such as Discord, TeamSpeak and Telegram.

"I Guess" is also a common definition for IG.

Examples of IG in Sentences

Here are examples of IG being used in conversations:

An Academic Look at IG

Depending on its meaning, the abbreviation IG is used in different ways:

Example of IG Used in a Text