What Does IJS Mean?

The abbreviation IJS is commonly used informally with the meaning "I'm Just Saying" to soften an observation or criticism, or a piece of advice that may not be well received. For example:

IJS has the same meaning as the abbreviation JS (Just Saying).

In the classic 1978 movie "Midnight Cowboy," drug smuggler Billy Hayes, played by Brad Davis, pleads his case for release to a Turkish court and uses the line "I'm not sayin' this is right or wrong. I'm just saying that's the way it is."

When I write IJS, I mean this: 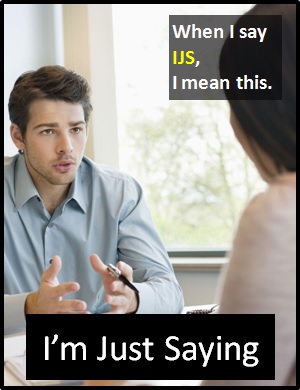 IJS, standby to be offended.

Examples of IJS in Sentences

Here are examples of IJS being used in conversations:

An Academic Look at IJS

As it is pronounced using its individual letters (i.e., "Eye Jay Ess"), IJS is classified as an initialism abbreviation. Initialisms are different to acronyms, which are spoken like words.

Before the digital era, we might have said something like "I'm Only Saying," "Just Saying," or even "I'm Just saying" instead of using the abbreviation IJS.

Example of IJS Used in a Text