What Does IMB Mean?

The abbreviation IMB is used with the meaning "I'm Bored" to indicate that the sender is disinterested in what they are currently doing and probably wishes to be somewhere else. The use of IMB implies that the sender has no way of getting out of the activity that is causing their boredom; e.g., they are probably at work or are being obliged to participate in something that they would really rather not do.

The statement "I'm Bored" and the abbreviation IMB are often used by children and teenagers. Child care experts believe boredom can be a positive state as it forces the cultivation of imagination and self-motivation as the youngster tries to find ways to alleviate their boredom.

When I write IMB, I mean this: 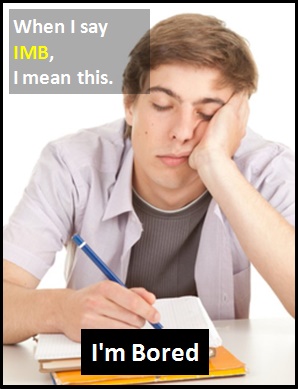 The "Best days of your life."

Examples of IMB in Sentences

Here are examples of IMB being used in conversations:

An Academic Look at IMB

IMB is an abbreviation of the sentence "I’m Bored" or "I Am Bored." It is often used as a standalone declarative sentence (i.e., a statement). In other words, it is not always used as another part of speech within a wider sentence.

Before the digital era, we would have just said "I'm Bored" instead of using IMB.

Example of IMB Used in a Text