What Does IMOO Mean?

IMOO means "In My Own Opinion." The term IMOO, with the meaning "In My Own Opinion," is typically used to preface a comment in order to soften the delivery and to make the speaker appear less forthright. IMOO usually means "I'm not saying that I'm right, but this is what I believe."

Although it may appear that the person using IMOO is making a genuine attempt to avoid confrontation, the phrase is often used by people with passive aggressive personalities (i.e., people who mask their controlling or confrontational nature using non-emotive language).

When I write IMOO, I mean this: 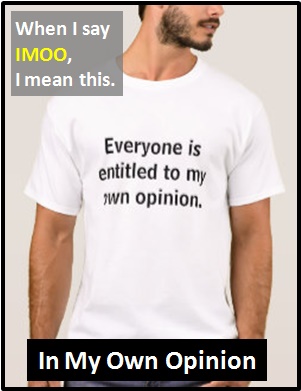 Examples of IMOO in Sentences

Here are examples of the abbreviation IMOO being used in sentences:

An Academic Look at IMOO

IMOO is an initialism abbreviation. Technically, this means it is pronounced using its individual letters (i.e., Eye Emm Oh Oh), but as this is harder to say than "In My Own Opinion," it is not usually uttered using its letters. In other words, the abbreviation IMOO is for efficiency in writing and not efficiency in speech.

The abbreviation IMOO is a prepositional phrase (the preposition is in), which is used as an adverb to establish the setting for the main clause. Compare the examples below:

(Here, the prepositional phrase In Paris is an adverb of place.)

(Here, the prepositional phrase IMOO  is an adverb of concession, which is similar in meaning to "although this is just my view.")

Before the digital era, we would have said something like "In My Opinion" or "As Far As I'm Concerned" instead of using the abbreviation IMOO.

Example of IMOO Used in a Text