What Does OMW Mean?

The most common definition for OMW is "On My Way." The meaning can be taken literally, i.e., it is used to tell someone that you are en route to their location (in exactly the same way as IOMW ("I'm On My Way")).

OMW is also used to mean "Oh My Word!" In this context, it is employed to express surprise or shock, in the same way as OMG ("Oh My God!").

When I write OMW, I mean this: 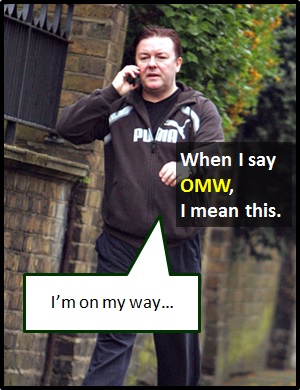 Examples of OMW in Sentences

Here's an example of OMW being used in conversation:

An Academic Look at OMW

Whether used to mean "On My Way" or "Oh My Word!" OMW is typically used as a standalone declarative sentence (i.e., a statement). It is not often used as another part of speech within a wider sentence.

Example of OMW Used in a Text

OMW
Help Us To Improve Cyber Definitions
Please tell us using this form.