What Does PINEAPPLE Mean?

The PINEAPPLE emoji means "complicated relationship." In Australia, PINEAPPLE is slang for a fifty-dollar bill and for a reprimand. The cartoon character SpongeBob SquarePants lives in a PINEAPPLE house at the bottom of the ocean.

Here is more information about each of these definitions of PINEAPPLE, with examples of use.

) is one of many fruit-based emojis used to indicate users' relationship status. It actually means "it's complicated."

As a result of the popularity of the emoji, the word PINEAPPLE is now also used to refer to a complicated relationship. For example:

In Australia, PINEAPPLE is commonly used as slang for a fifty-dollar bill, because the banknote is orange in color. (In a similar way to the use of greenback to refer to a US one-dollar bill.)

Also in Australia, PINEAPPLE is used to mean "reprimand," as in a ticking off or rebuke. For example:

When I write PINEAPPLE, I mean this: 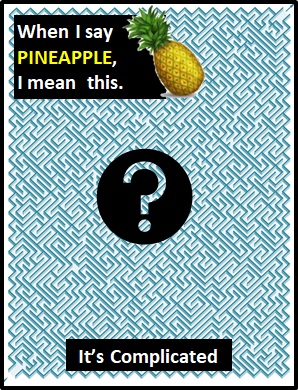 Summary of Key Points for the First Definition of PINEAPPLE

"Complicated Relationship" is the most common definition for the PINEAPPLE emoji (

PINEAPPLE is a slang name for the Australian Fifty-Dollar Bill.

PINEAPPLE is also slang for "Reprimand."

Summary of Key Points for the Fourth Definition

An Academic Look at PINEAPPLE

The image of a PINEAPPLE (

) is often used as an emoji, (i.e., a small digital image or icon used to express an idea or emotion).

When used to mean fifty dollar-bill of reprimand, PINEAPPLE is a slang word. Slang refers to words, phrases and uses of language that are regarded as very informal and which are often restricted to a special context or a particular group of users.

Example of PINEAPPLE Used in a Text