What Does SBF Mean?

When I write SBF, I mean this: 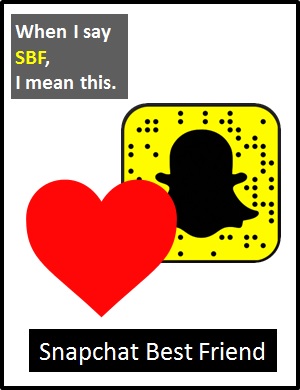 SBF is most commonly seen as or SBFs or SBFS (Snapchat Best Friends).

SBF also means "Single Black Female" on online dating sites, such as Craigslist, Tinder, Zoosk and Match.com, as well as in texts and on adult chat forums.

Examples of SBF in Sentences

Here are examples of SBF being used in conversations:

An Academic Look at SBF

In both meanings, SBF is used as a noun. More accurately, it is a noun phrase (i.e., a group of words that play the role of a noun).

Of interest, dating sites are full of specialist abbreviations, which have their roots in a time when personal ads featured in local newspapers and users were charged by the word. (A term like SBF (Single Black Female) would cost the user the fee for one word as opposed to four.)

As it is pronounced using its individual letters (i.e., "Ess Bee Eff"), SBF is classified as an initialism abbreviation. Initialisms are different to acronyms, which are spoken like words.

Example of SBF Used in a Text