What Does SELFIE Mean?

SELFIE means "Self-taken Camera Picture." A SELFIE is a self-portrait photograph. They are typically taken with a digital camera or camera phone and are often posted on social-media networks (like Facebook, Twitter, and Instagram). Clearly, people have been taking pictures of themselves for years, but the term SELFIE came to prominence in the early 2000s (due to the popularity of MySpace). SELFIES gained even more popularity in 2010 when the front-facing camera was introduced on the iPhone 4.

The increase of SELFIES led to the creation of mobile apps like Instagram and Snapchat. In 2013, the Oxford English Dictionary announced that "SELFIE" was the "Word of the Year." Many celebrities post their SELFIES on social media. Famously, Kim Kardashian released a book entitled "Selfish" to showcase her many SELFIES.

When I write SELFIE, I mean this: 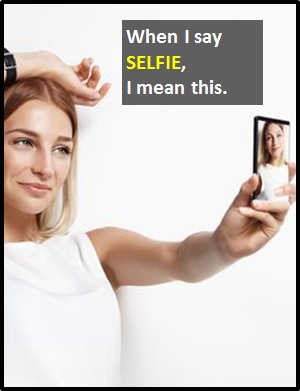 The image shows a woman taking a photograph of herself.

Examples of SELFIE in Sentences

Here are examples of SELFIE being used in conversations:

An Academic Look at SELFIE

SELFIE is typically used as a noun (i.e., a naming word). For example:

(Here, SELFIE is being used as a noun.)

Evolution of the SELFIE

Here is a 3-minute video showing how the SELFIE has evolved:

Example of SELFIE Used in a Text