Sksksk is an "Expression of Amusement or Excitement."

The origins of Sksksk are unclear, but it is widely believed to have originated within the black community in the United States, long before it was ever utterd by a VSCO Girl. Since its VSCO revival, Sksksk (together with the other stereotypical VSCO catchphrases "And I Oop" and "Save The Turtles") has spurned hundreds of thousands of parody videos on channels such as YouTube and TikTok. Check out this ironic VSCO Girl meme for an example:

When I write sksksk, I mean this: 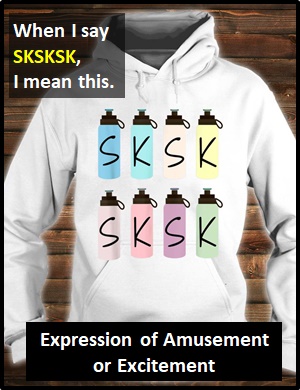 "Expression of Amusement or Excitement" is the most common definition for Sksksk on Snapchat, WhatsApp, Facebook, Twitter, and Instagram. Here is some more information about Sksksk:

Examples of Sksksk in Sentences

Here's an example of Sksksk being used in conversation:

(Here, Sksksk is being used to express amusement.)

(Here, Sksksk is being used to express both excitement and amusement.)

Example of sksksk Used in a Text