What Does SNOWFLAKE Mean?

SNOWFLAKE means "Someone Who Is Easily Offended."

The term SNOWFLAKE is used as a pejorative or derogatory term to describe someone who is perceived to be easily offended by opinions which differ from their own.

The use of SNOWFLAKE as a politicized insult was originally aimed at young people (see Generation Snowflake). However, its use was subsequently expanded by those on the political right to attack people of any age for criticizing or protesting policies, actions or attitudes which they deem politically, racially, or socially unjust.

When I write SNOWFLAKE, I mean this: 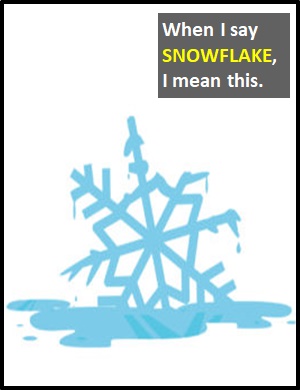 SNOWFLAKEs are delicate and melt under pressure.

Examples of SNOWFLAKE in Sentences

Here are examples of SNOWFLAKE being used in conversation:

An Academic Look at SNOWFLAKE

SNOWFLAKE is typically used as a noun (i.e., a naming word).

"SNOWFLAKE" is a pejorative (i.e., a word or term expressing contempt or disapproval). It is also a neologism (i.e., a newly coined word or phrase). It came to prominence as a politicized insult in 2016.

Before the digital era, we might have said something like "Overly sensitive" or "Fragile" instead of using SNOWFLAKE.

Example of SNOWFLAKE Used in a Text