What Does STYL Mean?

STYL means "Speak to You Later." The abbreviation STYL features at the end of conversation to end the conversation. The meaning of STYL can usually be taken literally (i.e., I'll talk to you later on), but sometimes it is just another way of saying goodbye.

Below are some more common ways of saying the same thing:

When I write STYL, I mean this: 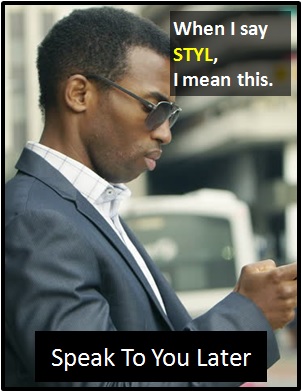 STYL means Speak To You Later.

Examples of STYL in Sentences

Here are examples of STYL being used in conversations:

An Academic Look at STYL

STYL is an initialism abbreviation. Technically, this means it is pronounced using its individual letters (i.e., Ess Tee Wye Ell), but as this is harder to say than "Speak to you later," it is not often uttered using its letters. In other words, the abbreviation STYL is for efficiency in writing and not efficiency in speech.

Grammatically, STYL is used as a declarative sentence (i.e., a statement) with the meaning "I will talk to you later."

Example of STYL Used in a Text