What Does WTM Mean?

WTM means "What's The Move?," "What's The Matter?" and "Whatever That Means." Here is more information about each of these definitions of WTM.

WTM is often used with the meaning "What's The Move?," as a way of asking "What's the plan?" or "What are we going to do today?" The usual implication is that whatever is planned involves at least the sender and the recipient of the message. (Unlike abbreviations such as WRUD (What Are You Doing?)).

WTM is also used with the meaning "What's The Matter?" It is a way of asking if a person is OK, typically used when someone is acting strangely (e.g., is quieter or more abrupt than usual).

Other abbreviations with similar meanings to WTM in this context include: In 2012, Indie pop band Milo Greene released a track entitled "What's The Matter." Milo Greene is the name of a fictitious booking agent, invented by the band to help them secure gigs.

When used with the meaning "Whatever That Means," WTM usually indicates cynicism on the part of the sender about something that another person has said (or typed). However, it may also indicate a genuine lack of comprehension and represent a request for help in understanding.

When I write WTM, I mean this: 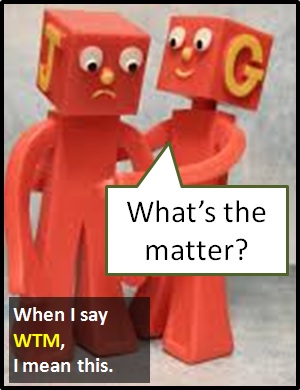 WTM also means "What's The Move?" and "Whatever That Means."

"What's The Matter?" is another common definition for WTM.

WTM also means "Whatever That Means."

Examples of WTM in Sentences

Here are examples of WTM being used in conversations:


(Here, WTM means "Whatever That Means" and expresses cynicism.)


(Here, WTM means "Whatever That Means" and indicates a genuine lack of understanding.)

An Academic Look at WTM

As it is pronounced using its individual letters (i.e., "Dublyoo Tee Emm"), WTM is classified as an initialism abbreviation. Initialisms are different to acronyms, which are spoken like words. However, WTM is not often spoken using its letters. It is usually employed for efficiency in writing and not efficiency in speech.

WTM often plays the role of an interrogative sentence (i.e., a question). However, it is commonly seen without a question mark. It can be written "WTM?" or "WTM".

Example of WTM Used in a Text

AOK (all ok) DFLI (don't feel like it) HYFB (hope you feel better) IAG (it's all good) OFOC (overwhelming feelings of concern) SOK (it's okay!)