What Does TIM Mean?

TIM means "Time Is Money" and is a nickname for fans of Glasgow Celtic Football Club. Here is more information about each of these definitions of TIM, with examples of use.

The abbreviation TIM is used with the meaning "Time Is Money" as a way of saying that time is valuable and shouldn't be wasted. For example: The phrase "Time Is Money" is usually credited to Benjamin Franklin, who used it in an essay Advice to a Young Tradesman, 1748: "Remember that time is money. He that idly loses five shillings' worth of time loses five shillings, and might as prudently throw five shillings into the sea." However, the saying is widely held to have been in common use much earlier.

Tim is a nickname for fans of Scottish football club Glasgow Celtic FC. It is thought to have its origins in the name of a Catholic street gang from the early 1900's, which was named after the gang leader, Tim Malloy.

Among some Protestants in Scotland, Tim is used as a generic germ to refer to all Scottish Catholics, not just Celtic fans.

When I write TIM, I mean this: 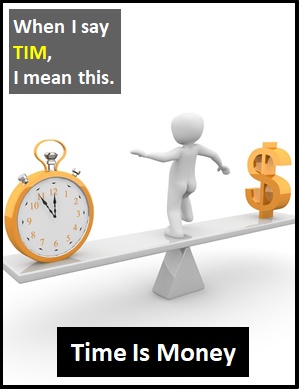 Tim is also a nickname for fans of Glasgow Celtic FC.

An Academic Look at TIM

Example of TIM Used in a Text