What Does TINA Mean?

TINA is a girls' name, often used as a slang term to refer to the drug "Crystal Methamphetamine" ("Crystal Meth"). The use of TINA in this context probably stems from the custom of referring to "Crystal Meth" as "Christina."

"Crystal Meth" is also known as: Another theory of the the origin of TINA to refer to "Crystal Meth" claims that it came from the custom of selling illegal drugs in packets of one-sixteenth of an ounce, i.e., one "teenth." Over time, "teenth" became TINA. However, "teenth" was actually a common measure of marijuana, not of methamphetamine.

When I write TINA, I mean this: 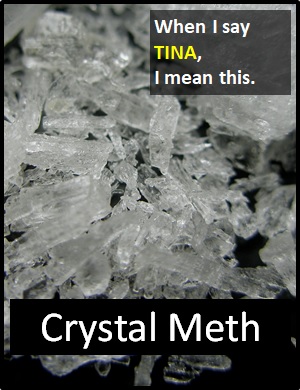 TINA is a sixteenth of an ounce.

Examples of TINA in Sentences

Here's an example of TINA being used in conversation:

An Academic Look at TINA

In this context, TINA is a slang word. Slang refers to words, phrases and uses of language that are regarded as very informal and which are often restricted to a special context or a particular group of users.

TINA is typically used as a noun (i.e., a naming word) . For example:

Example of TINA Used in a Text