What Does WDYM Mean?

WDYM means "What Do You Mean?."

The abbreviation WDYM is used on chat forums and in texts with the meaning "What Do You Mean?" as a straightforward question, seeking clarification. It is also commonly used by fans of British rap music searching for the lyrics of two rap "gangs," both of whom wrote songs called WDYM.

In mid-2018, the rap artist Oboy (KuKu) entered into a "dissing" match with members of the rap group 410. Both groups released songs called WDYM, that specifically dissed members of the other group. The general premise of the arguments was that the other group didn't live up to the BADMAN (gangster) persona that they rap about.

You can read Oboy's (EXPLICIT) lyrics and hear the song here.

You can read 410's (EXPLICIT) lyrics and hear the song here.

Here's a short video explaining how to use WDYM:

When I write WDYM, I mean this: 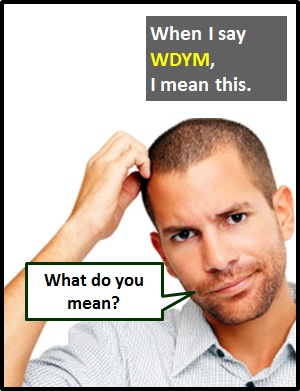 WDYM is also the title of a couple of rap songs, from competing groups.

Examples of WDYM in Sentences

Here are examples of WDYM being used in conversations:

An Academic Look at WDYM

WDYM is an initialism abbreviation. Technically, this means it is pronounced using its individual letters (i.e., Dublyoo Dee Why Emm), but as this is harder to say than "What Do You Mean," it is not often said using its letters. The abbreviation WDYM is used for efficiency in writing and not efficiency in speech.

WDYM plays the role of an interrogative sentence (i.e., a question), but it is commonly seen without a question mark. It can be written "WDYM?" or "WDYM". (Ironically, just typing a question mark on its own ("?") would have the same effect as typing WYDM, with or without the question mark.)

Before the digital era, we might have just said "What Do You Mean?" instead of using the abbreviation WDYM.

Example of WDYM Used in a Text