What Does WTPA Mean?

WTPA means "Where's The Party At?"

"Where The Party At" is the title of a number-one single by American R&B group Jagged Edge. In 2001, the song spent three weeks at the top of the US R&B chart.

When I write WTPA, I mean this: 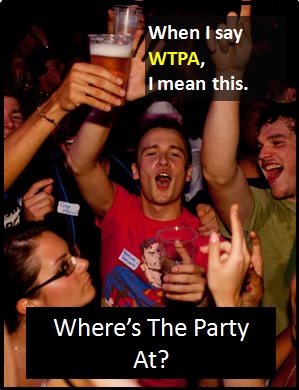 WTPA can also mean "What's all the fuss about?"

Examples of WTPA in Sentences

Here are examples of WTPA being used in conversations:

(Here, WTPA is a question about the venue of a party.)

(Here, WTPA is being used with the meaning "What's all the fuss about?")

An Academic Look at WTPA

WTPA is an initialism abbreviation. Technically, this means it is pronounced using its individual letters (i.e., Dublyu Tee Pee Ay). However, as this is harder to say than "Where's The Party At?", it is not often uttered using its letters. In other words, the abbreviation WTPA is for efficiency in writing and not efficiency in speech.

WTPA plays the role of an interrogative sentence (i.e., a question), but it is commonly seen without a question mark. In other words, it can be written "WTPA?" or "WTPA".

Before the digital era, we would have just said something like "Where's The Party At?" or "What's All The Fuss About?" instead of using the abbreviation WTPA.

Example of WTPA Used in a Text

CARTY (Party In A Car) LFP (Looking For Party) DMAF (Don't Make A Fuss) WUG (Where You Going?) WYA (Where You At?)