The abbreviation WYDM is typically used in text-based communications with the meaning "What You Doing Man?" (especially in the US) or "What You Doing Mate?" (especially in the UK, Australia and New Zealand). In this context, WYDM is a straightforward question, similar in meaning to WAYD ("What are you doing?") and WAYDRN ("What are you doing right now?").

What You Do Matters

WYDM is also used with the meaning "What You Do Matters." In this context, WYDM is a popular phrase used widely online and in self-help literature as a motivational expression.

"What You Do Matters" is also a non-profit company based in London, England. The aims of WYDM are to foster a commitment to women and young girls, promoting self-confidence, strong interpersonal skills and empowerment, alongside encouraging involvement in community work.

When I write WYDM, I mean this: 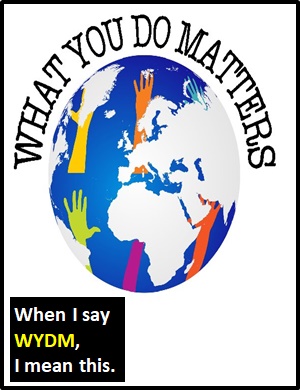 "What You Doing Man?" is the most common definition for WYDM on Snapchat, WhatsApp, Facebook, Twitter, and Instagram, especially in the US. Here is some more information about WYDM:

"What You Doing Mate?" is also a common definition for WYDM, especially in the UK, Australia and New Zealand.

"What You Do Matters" is also another definition for WYDM.

Examples of WYDM in Sentences

Here are examples of WYDM being used in conversations:

(Here WYDM means "What You Do Matters.")

An Academic Look at WYDM

As it is pronounced using its individual letters (i.e., "Dblyoo Why Dee Emm"), WYDM is classified as an initialism abbreviation. Initialisms are different to acronyms, which are spoken like words.

Before the digital era, we might have said something like "What are you up to?" instead of using WYDM.

Example of WYDM Used in a Text