What Does DNO Mean?

DNO means "Don't Know." The abbreviation DNO is commonly used to express undecision or that someone does not have an answer to a question. Sometimes it can be written as "dunno," which some believe led to the use of DNO as a shortened version. Occasionally, it can be used to express anger at something that has happened. (For example, "I don't know. It doesn't matter how many times I ask her not to use my cup she still does it.")

When applied to a group of people, (e.g., people voting in an opinion poll) those who are undecided can be known collectively as the "don't knows."

When I write DNO, I mean this: 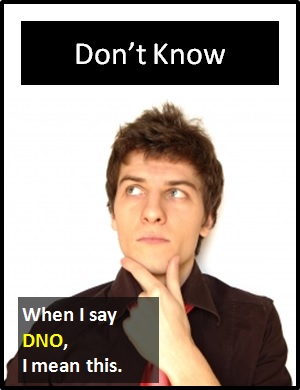 DNO means you are undecided or have no answer to a question.

Examples of DNO in Sentences

Here are examples of DNO being used in conversations:

An Academic Look at DNO

DNO is an acronym (i.e., an abbreviation spoken like a word). Acronyms differ from initialism abbreviations, which are pronounced using their individual letters.

Before the digital era, we would have just said "I don't know" instead of DNO.

Example of DNO Used in a Text