What Does EOB Mean?

EOB means "Explanation of Benefits" and "End Of Business." Here is more information about each of these definitions of EOB, with examples of use.

EOB is an abbreviation used by medical insurance companies with the meaning "Explanation of Benefits."

In this context, an EOB is a document sent to a policy holder detailing medical treatments and services that have been claimed by healthcare service providers on the policy holder's behalf and indicating whether those claims have been approved.

The abbreviation EOB is used in financial markets with the meaning "End Of Business." It is the end of the trading day. (In New York City EOB is 5:00 PM Eastern Standard Time (EST)).

EOB is used in wider business circles to refer to the end of the business day. It is typically used in working environments that have contact with outside companies or clients to mean the time at which those contacts cease and attention turns to internal administration. This is usually sometime before the actual end of the working day.

Other abbreviations with similar meaning to EOB include:

When I write EOB, I mean this: 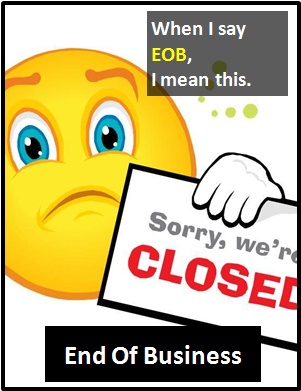 Here's a short video explaining how EOB is used:

"End of Business" is another definition for EOB.

Examples of EOB in Sentences

Here's an example of EOB being used in a joke with the menaing "End of Business":

An Academic Look at EOB

Before the digital era, we might have said something like "end of the day" or "close of business" instead of using the abbreviation EOB.

Example of EOB Used in a Text