What Does FALSE FLAG Mean?

The term FALSE FLAG is used to describe an act carried out in such a way as to deliberately misrepresent the identity of the perpetrator. FALSE FLAG operations are usually military, terrorist, or cyber attacks, which are designed to provoke confusion and distrust among the target population, or to justify a response by the apparent victim (the actual perpetrator).

The origins of FALSE FLAG are disputed, but the term is thought to have already been in use long before the 16th century, since when it has been used to describe attacks by pirates and naval vessels, that would fly a FALSE FLAG in order to deceive their enemies into allowing them to get close enough to launch an attack.

In the 21st century, FALSE FLAG has been used more-and-more widely by conspiracy theorists, who often claim that terrorist attacks, high-level computer hacks, and political assassinations were FALSE FLAG operations by the CIA or "deep state" (e.g., the assassination of JFK and the 9/11 attacks).

In early 2022, FALSE FLAG entered the mainstream lexicon, when the Biden administration claimed that Russia was planning to fabricate a pretext for invading Ukraine, by carrying out FALSE FLAG operations, such as staging a fake attack by Ukrainian forces on Russians.

You now know what FALSE FLAG means, but are you good at Cyber Speak? Well, let's see!

When I write FALSE FLAG, I mean this: 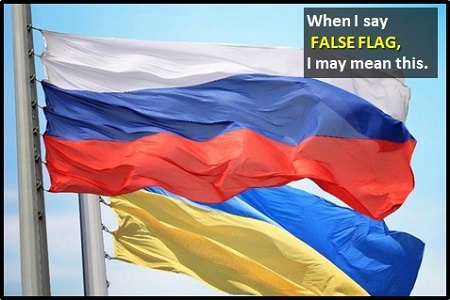 In early 2022, the US announced that Russia was planning a FALSE FLAG attack on Ukraine.

Example of FALSE FLAG Used in a Text