What Does QANON Mean?

QANON is an "Alt-Right Conspiracy Theory."

QANON is an alt-right, pro-Trump conspiracy theory that incorporates everything from "Pizzagate" to "false flag" mass shootings and the assassination of President John F. Kennedy. According to QANON, President Trump is battling a clandestine "deep state" network of political, business and media elites.

The QANON theory began in October 2017, when a subscriber using the name "Q" posted a message on the 4chan imageboard, claiming to have access to classified information implicating Democratic politicians, high-ranking officials and liberal Hollywood actors in an international child sex trafficking ring. QANON claimed that President Trump was not under investigation by special counsel Robert Mueller, but was actually working with him to go after these corrupt elites.

QANON has now grown to encompass a huge list of often contradictory claims. Followers contend deliberate misinformation is sown into "Q's" messages, making the conspiracy theories impossible to disprove. Recently, QANON has spread a number of conspiracy theories about coronavirus, ranging from claims about the pandemic being a hoax to scaremongering about face masks and vaccines.

According to the New York Times, QANON supporters began appearing at Trump re-election campaign rallies during the summer of 2018. In August 2019, the FBI declared QANON a potential source of domestic terrorism. However, President Trump has since retweeted or mentioned QANON related messages on numerous occasions.

QANON followers commonly tag their social media posts with the hashtag #WWG1WGA (Where We Go One, We Go All).

The number of QANON supporters is unknown. It appears to be a small organization, but it quickly developed an outsize presence on social media, particularly on Twitter. In July 2020, Twitter banned thousands of QANON-affiliated accounts and changed its algorithms to reduce the spread of such organizations. However, followers remain very active on dedicated message boards such as ENDCHAN and 8KUN. In June 2020, "Q" exhorted followers to take a "digital soldiers oath." In the following weeks, many people posted videos of themselves on Twitter, using the hashtag #TakeTheOath.

In July 2020,John Oliver, the host of the TV series "Last Week Tonight" gathered video messages from a number of celebrities, to encourage viewers to not fall for conspiracy theories such as those promoted by QANON. In the videos, the host of "Jeopardy!" Alex Trebek, "Fast & Furious" actor John Cena, "Ant-Man" actor Paul Rudd, "Pose" actor Billy Porter, and "Schitt's Creek" star Catherine O'Hara, urge people to think critically before sharing information, as well as explaining how to check sources. The videos can be viewed on the website "TheTrueTrueTruth.com".

When I write QANON, I mean this: 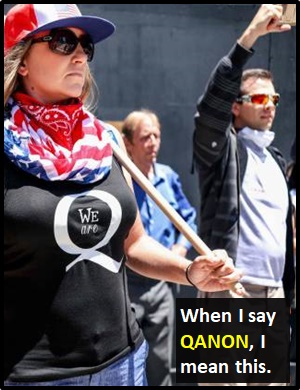 QANON is an alt-right conspiracy theory.

QANON is an Alt-Right Conspiracy Theory.

Examples of QANON in Sentences

Here's an example of QANON being used in conversation:

An Academic Look at QANON

Example of QANON Used in a Text