What Does GRT Mean?

The Great Replacement Theory (GRT) (or simply Replacement Theory (RT)) is a conspiracy theory that claims that the immigration policies of Western elites are part of a plot designed to replace the political power and culture of white people living in Western countries.

GRT has it roots in early twentieth-century French nationalism, but was popularized in 2012, when French author Renaud Camus published a book titled The Great Replacement, in which he argued that white Europeans were being "reverse colonized" by Black and Brown immigrants. GRT has since been adopted by white nationalists and anti-immigrant groups throughout Europe and the US.

In recent years, GRT has been embraced by a number of Republican politicians in the US and, with the help of Fox News, it has moved into mainstream right-wing thinking (despite some push back from traditional Republican figures).

In May 2022, a right-wing extremist shot dead 10 people and wounded three others, in Buffalo, New York. In a statement posted online before the attack, the alleged gunman wrote: "This crisis of mass immigration and sub-replacement fertility is an assault on the European people that, if not combated, will ultimately result in the complete racial and cultural replacement of the European people."

GRT has also inspired a number of other attacks, including the mass murder of worshipers at mosques in Christchurch, New Zealand, in March 2019 (that killed 51 people), and a mass shooting at a Walmart in El Paso, Texas, in August of the same year (that killed 23).

When I write GRT, I mean this: 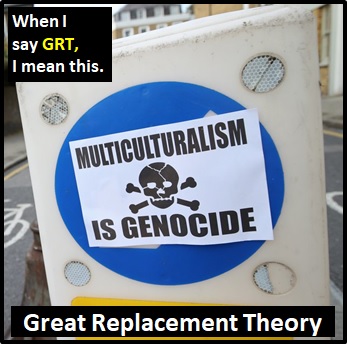 GRT is an anti-immigrant conspiracy theory.

An Academic Look at GRT

GRT is an initialism abbreviation. This means it is pronounced using its individual letters (i.e., Gee Arr Tee).

Example of GRT Used in a Text