What Does OOF Mean?

OOF is an exclamation of pain, dismay, or surprise. As an abbreviation, OOF means "Out of Office" and "Out of Focus."

Here is more information about each of these definitions of OOF, with examples of use.

Exclamation of Pain, Dismay, or Surprise

OOF (or "OOPH") is often used as an interjection, to represent the sound of someone having the air knocked out of them, either literally or figuratively. OOF is synonymous with "Ow," "Ouch" or terms such as "Really?" For example: OOF is widely used in the online gaming world with the meaning "I'm dead." It derives from the game Roblox, where it is the sound made when a Robloxian dies. Here's a look at the many uses of the Roblox OOF Memes:

The abbreviation OOF is typically seen in automated email replies, with the meaning "Out of Office" (or "Out of Facility"). In this context, OOF is a notification that the recipient of a message is absent and unable to reply at that moment.

In photography and in general chat about photographs, OOF is often used with the meaning "Out Of Focus."

Here's a short video explaining how to use OOF:

When I write OOF, I mean this: 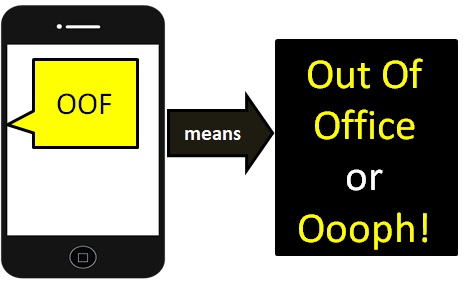 OOF also means "Out of Focus."

OOF is often used as an exclamation of pain or surprise, especially in online gaming.

"Out of Office" is the most common definition for OOF in a business context.

"Out of Focus" is the most common definition for OOF in photography.

Examples of OOF in Sentences

Here are examples of OOF being used in conversations:

(Here, OOF is an exclamation used to express pain or dismay.)

An Academic Look at OOF

When used with the meanings "Out Of Focus" and "Out Of Office," OOF is an initialism abbreviation. Technically, this means it is pronounced using its individual letters (i.e., Oh Oh Eff). However, it is not often spoken using its letters. The abbreviation OOF is typically used for efficiency in writing and not efficiency in speech.

When used as an interjection, OOF is an onomatopoeic word, as it imitates the sound it describes (i.e., "Ow" or "Ouch"). An interjection is a word added to a sentence to convey an emotion or a sentiment such as surprise, pain or dismay.

Example of OOF Used in a Text