The term "Big Beautiful Black Woman" is used to describe a woman of African origin who has a large figure and a pretty face. It is an empowering and politically-correct term for good-looking women who might previously have been described as "fat."

The abbreviation BBBW is typically used as a description on dating sites or as an indexing tag on pornographic websites. Other terms that relate to plus-sized women include:

When I write BBBW, I mean this: 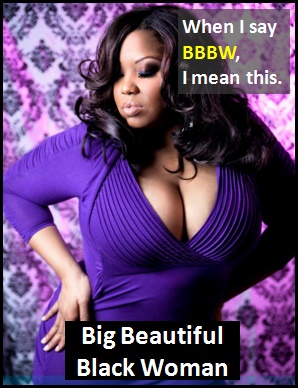 BBBW means "Big Beautiful Black Woman." This is the most common definition for BBBW on online dating sites, such as Craigslist, Tinder, Zoosk and Match.com, as well as in texts and on chat forums.

As it is pronounced using its individual letters (i.e., "Bee Bee Bee Dublyoo"), BBBW is classified as an initialism abbreviation. Initialisms are different to acronyms, which are spoken like words.

Before the digital era, we would probably have just said "Big Beautiful Black Woman" instead of using the abbreviation BBBW.

Example of BBBW Used in a Text