What Does JMHO Mean?

JMHO (Just My Humble Opinion) is usually sent after a message to make the sender seem less authoritative and forthright. IMHO carries a connotation of "I'm not claiming this is a fact. It's just my opinion."

JMHO is often used by people with passive aggressive tendencies (i.e., people who hide their controlling nature with non-confrontational language). It is a synonym of the more common term IMHO.

JMHO is sometimes expanded to "Just My Honest Opinion." However, this is not a common definition. In this version, there is conflict between the words "Just" and "Honest." ("Just" weakens the intended strength of the assertion while "Honest" strengthens it.)

When I write JMHO, I mean this: 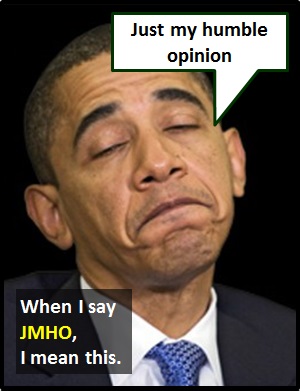 JMHO is a synonym of the more common IMHO (In My Humble Opinion).

Examples of JMHO in Sentences

Here is an example of JMHO being used in a conversation:

An Academic Look at JMHO

JMHO is used as a standalone declarative sentence (i.e., a statement), which translates best as "This is just my humble opinion." In other words, it is not used as another part of speech within a wider sentence.

JMHO is an initialism abbreviation. This means it is pronounced using its individual letters (i.e., Jay Em Aich Oh). Initialisms contrast with acronyms, which are spoken like words.

Example of JMHO Used in a Text