What Does DEEPFAKE Mean?

DEEPFAKE is an advanced technique for human image and voice synthesis, based on machine learning (ML) and artificial intelligence (AI). DEEPFAKE technology allows producers to place anyone's likeness and/or voice in an existing image, video or audio clip, and can even be used to create entirely fictional photos from scratch.

It is difficult to produce a good DEEPFAKE on a standard computer, as the technique requires powerful graphics cards and computing power, as well as expertise. However, the technology is constantly evolving and improving, and there are now a number of cell-phone apps available with a limited DEEPFAKE capability. (See also SHALLOWFAKE .)

When I write DEEPFAKE, I mean this: 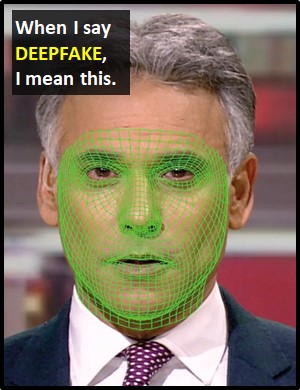 DEEPFAKE is an Advanced Technique for Human Image and Voice Synthesis.

"Advanced Technique for Human Image and Voice Synthesis" is the most common definition for DEEPFAKE on Snapchat, WhatsApp, Facebook, Twitter, and Instagram. Here is some more information about DEEPFAKE.

Examples of DEEPFAKE in Sentences

Here are examples of DEEPFAKE being used in conversations:

An Academic Look at DEEPFAKE

As it is formed by merging several words into one, DEEPFAKE is classified as a portmanteau word. It is formed by amalgamating the words Deep Learning and FAKE.

Example of DEEPFAKE Used in a Text